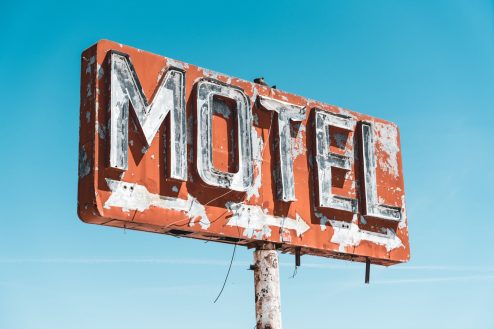 The pool at the Quality Inn Motel was black.

Florida rains everyday in the summer creating a curtain of steam.  The humidity feels heavy like a wet blanket. Pressing on you, weighing you down.  In the room there was a one inch gap between the window and the broken a/c unit.  That’s how the rain got in. So did the cockroaches.  It was always musty, anything made of paper got gray dusty spots on it.  Sometimes fans were passed out to help circulate the air….but they were given to executives first..like everything.  Mostly they’d makes us wipe the surfaces with bleach and water. It helped to temporarily cover the smell of mildew and urine.

The carpet was always wet by the window and by the bathroom where the plumbing backed up regularly, but the grownups didn’t care as long as we chicken-picked then raked it clean for our weekly white glove inspection.  The executives got the only vacuum cleaner.

The kitchen smelled like vomit, all the time–no matter what.  As if all the babies forced to live at the QI were trying to digest what was happening to them,  but couldn’t so simply kept spitting it up. And the moms just kept feeding them barley milk, per policy.

Some of the girls in my dorm cried constantly–missing their families.  Some had recurring nightmares, some of us had been in so long there were no feelings left we could describe.  Life before was like a dream I couldn’t quite remember when I woke up. Foggy and distant. It was better that way.  If the crying, screaming, or bed wetting disturbed us we were to report it, so offenders could be “handled”.

I was an ageless spirit in a child’s body.

Id taken care of my mother, of my sister, of myself for as long as I could remember.

My superpower could spot the problems–see the dangers,  the shifty eyes, sweaty lips, men who were too touchy, too friendly, always wanting.

My superpower could spot red flags. It was my hero.

My superpower knew what to look for. It knew others were gullible.

My superpower knew how to spot liars. It had X-ray vision.

At night, after lights out I would lay awake in my narrow bed made of plywood and two by fours and wish for a different superpower: to tell the future, to know if I would be happy someday.   I worried whether I would ever be free.  I hoped when I grew up somehow some way I could have a happy ending.  I postulated it over and over.

I worried about telling this to anyone.

I worried someone would see into my mind in session.

I worried I would never be able to tell this to anyone.

I wanted someone to listen to me about something other than clearing the planet, saving mankind, or “making it” this lifetime.  Or about being up-tone, or up-stat, and keeping my exchange in..and no matter what not going down a dwindling spiral.  becoming degraded, or being a victim.

I wanted someone to tell me about Disneyland.

I wanted to go to Disneyland and come back and tell someone else about Disneyland.

I wanted a magic castle.

I wanted someone to tell me that was okay.

I wanted to be normal.

I wanted to hurt and to feel it without shame.

I wanted to smile and mean it.

I wanted a fairy godmother who’d help me.

Who’d turn the roaches into footmen.

Or a Prince Charming who would wake me.

And we’d live happily ever after.     I wanted to learn things that were real, not just policy.

And then I wanted to cry and be sad.

Just once, I wanted to be sick and take medicine.

Not made to feel responsible, accountable, to blame.

Not sent off to isolation.

Telling me it was ok, I was ok.  Everything would be ok.

Outside the air was heavy, hot and wet. Oppressive…like everything I knew.

The heat in the sauna dried Florida out—dried us out—dried anything out.

When the heat shimmered down, zealous hotel guests who had chosen this,  paid for this: to sweat for weeks and hours on end, ladled more and more water onto the coals.  They wanted their money’s worth of Purification.

I didn’t choose this. Any of it.   Down below the adults squeezed in like sardines..pressing their thighs against mine, their sweat running down my legs, squashing me, suffocating me, while they stunk, cussed and preached.  The angry hissing steam flumed up to the topmost wooden step.  Nobody wanted to be in the heat up there, so I could sit alone, safe, squeezed into a small ball, backed into the dark corner, sweating into my eyes, with my wet towel stuffed in my mouth so I could breathe.   Still, my breath burned down into my lungs.

There were moments when my vision would blur and I didn’t know if it was the sweat.  There were times that I heard things and didn’t know if the sounds were real.   Would I betray me too?  It was not possible to think in the sauna.  Which was better.   Somewhere, everywhere in my little husk of a body I longed for rescue.  I longed for the childhood I didn’t get.  Would never get.

That childhood was for dilletants.  Not for big little thetans like me.  I was one of the chosen. A Child of Scientology.