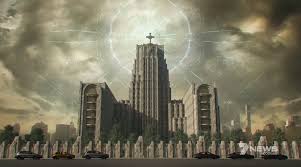 Tristan Silverman: As a second generation, I can’t speak for everyone, but when you leave there’s not like a definitive point. For me I didn’t feel like I’d fully left until I fully realized what I was leaving.

Bryan Seymour: And how did you escape?

Silverman: Jumped out a window and I hitchhiked to Chicago.

Seymour: She is one of the lucky ones. Raised from birth as a Scientologist, she made a break for it and thought she was free of the cult for good.

Silverman: My name is Tristan Silverman. I am a poet, and I was in Scientology for about 26 years.

Seymour: What was it like being a gay woman in Scientology, because Scientology tells me and the world that they’re very accepting, they support equal rights, and the LGBTIQA community is welcome and embraced and loved by Scientology.

Silverman: Well, it’s so much fun, being gay in Scientology. So that’s…

L. Ron Hubbard: That’s terrible, that’s bad manners, you know? I mean, that business about sex and all that sort of thing.

Seymour: L. Ron Hubbard branded homosexuality an aberration which could be cured with Scientology exercises. His own son Quentin’s homosexuality caused him great shame and likely contributed to Quentin’s suicide.

Delphian video: What if the school’s goal was not about grades but about gaining a real understanding of any subject matter a student confronts.

Seymour: The Delphian School in Oregon promoted itself as a new kind of progressive institute without disclosing its true purpose to recruit and train children as Scientologists.

Seymour: Some of the exercises were extremely inappropriate, including perverted interrogations by adult teachers in front of the entire class.

Lauren Haggis: So I had my teacher [redacted] sit across from me and just say the most ridiculous, sexual, outlandish like things trying to get me to squirm…

Seymour: To emote, to react.

Lauren Haggis: To emote, yes. We were trained that this is appropriate, that this is normal. But as an adult who has been in the real world for so long, you’re training kids to be abused and to not do anything about it, just to sit there.

Silverman: There was a rule at the time that you could only be alone and sexually aroused with a member of the opposite sex for 35 seconds. I don’t know when that…

Seymour: How do they enforce that rule? That’s absurd.

Silverman: It is, well, as you know with Scientology a lot of it is self-inflicted.

Silverman: So you enforce on yourself.

Seymour: Her fellow students included the children of celebrity Scientologists, including Paul Haggis’s three daughters. And Lauren Haigney, the niece of Tom Cruise.

Silverman: Lauren Haigney asked me to come into her room at break and I did and she was sobbing. She was like my uncle and my aunt are getting divorced and I just found out she’s an SP. And I was like, what? Your aunt?

Seymour: And who was this aunt?

Silverman: Nicole Kidman. And she’s like, Aunt Nic is this SP and I had no idea and I’m like really — she was really distraught about it.

Seymour: SP stands for Suppressive Person, someone who is a threat to Scientology and must be shunned, or, if they engage or criticize Scientology, destroyed using any means possible.

Silverman: And then I did an internship with Paul Haggis when I was about 15. He was a writer first. He was always a writer. And I remember because he let me stay at his house, because I was, he was like, I’ll give you an internship, and I was like, I don’t know anyone in LA, can I stay at your house? And he was like, sure.

Seymour: Five years ago, Tristan was living in her grandfather’s New York apartment, once the home of newspaper tycoon William Randolph Hearst, near Central Park. One day, she received an unexpected phone call. So Kathy O’Gorman calls you up…

Seymour: And, what did she say?

Silverman: She said I’m a longtime Sea Org member or staff member, and I was like, what did I do wrong? ‘We are just at random pulling names out of a database of all the public and just calling them up to sort of see how they’re doing, and what their experience is like so that we can get a broader, more global, perspective.’

Seymour: So just randomly your name came up.

Seymour: That’s what she said.

Seymour: Kathy O’Gorman is a senior Scientologist who’s worked closely with first the founder, L. Ron Hubbard, and the current leader David Miscavige. In 1976, when Hubbard’s son Quentin committed suicide in Las Vegas it was O’Gorman who was on duty at Scientology’s Clearwater headquarters in Florida and refused to answer questions from a detective who was calling looking for information. In the early 80s David Miscavige appointed O’Gorman to a senior role in the Office of Special Affairs, Scientology’s Black Ops unit.

Silverman: And that’s when she started to sort of ask me about Paul Haggis.

Seymour: What did she ask?

Silverman: She began to ask me questions about how I came to know his family, what he was like, if he was ever inappropriate? She wanted to know if he was faithful to his wife, if he ever did anything inappropriate with me or other women around me, if he had ever said anything bad about Scientology, if I would be willing to come in and have a conversation with somebody, maybe her, I don’t know, in person. At the time I didn’t know that they were making all these videos. I wasn’t in tuned to it all.

Kathy Slevin: He used that charm in order to con people. Paul’s a born con artist.

Seymour: Tristan says O’Gorman also asked her if Paul had ever molested her and his own daughters when they were children. I mean, what did you make of that?

Silverman: I just thought it was absurd.

Seymour: A few days later she left her apartment to visit a sick relative. And was it morning or night when you left the apartment?

Silverman: Morning. So it was around this time, actually.

Seymour: You get up to the end of the block here…

Seymour: And what do you see coming across the road here?

Silverman: A van pulling over. And I remember thinking, because you’re not supposed to, because those are the buses…

Silverman: And you don’t want to mess with New York City bus drivers.

Silverman: So that’s when the guy got out and then he walked across the street towards me and I was around here. And that’s when I knew he was a Scientologist. So there’s two of them, and the one guy said, Hi, Tristan.

Silverman: Yeah. He said his name, I don’t remember what it was.

Seymour: Had you ever met him before?

Seymour: He knew who you were.

Seymour: How did he grab your arm? Show me.

Silverman: He was just, how you doing, what’s going on? I was like, I’m a little busy, guys, what’s going on. And it was sort of like they were all like around me and there was people everywhere, you know? And it’s embarrassing. We started to move, and literally we pulled up right around here and I jumped in and I ran into the subway.

Seymour: Ran down the stairs and escaped into the subway.

Seymour: Yeah, I can see that.

Tony Ortega: I am surprised to hear that. I mean, nobody should go through that, but I can also say that it’s very consistent with the way the Office of Special Affairs and the Church of Scientology have operated since the 1960s. They consider themselves a superior species, they call themselves Homo Novi.

Seymour: What do they call themselves?

Ortega: Homo Novi, the new man. They are a new species and they have no respect for those of us that are not Scientologists and our petty laws. OSA is the secret police of Scientology, they are the East German STASI. This is what they do.

Seymour: With hindsight now, why do you think they were trying to take you off the street and take you away?

Silverman: Personally? Without question, I only have one, is, absolutely to get me to record a video.

Seymour: And to record a video about what?

Seymour: She feared that she was going to be swallowed whole by the organization again and brought back in, and forced to publicly condemn you. What’s your reaction to that?

Paul Haggis: That she’s a very brave woman to speak out. So many people don’t feel they can speak. They don’t have a voice and they’re terrified. And Scientology can ruin you.

Seymour: Scientology was clearly specifically looking to target Paul Haggis and his relationships with women. One of the most effective tools at their disposal is their own files on current and former members containing written transcripts of their most personal confessions along with audio and video recordings, including those made by their biggest celebrities. What’s the longest you’ve spent in a room on the E-Meter holding the cans.

Seymour: I’m guessing it never occurred to you that they would be willing and able to use that stuff against you.

Haggis: No, they say they won’t. They say it’s priest-penitent. Except, then they say well, unless you’re a suppressive person. But yes, there are many, many folders. I mean, they write down everything you say. Forget the video and audio recordings, they write down every word you say. I saw my folders at one point, they took up a wall, you know, they were probaby 20 high and 10 across.

Seymour: Scientology denies it directed members to kidnap Tristan Silverman, or any involvement in any alleged plot against Paul Haggis. All statements can be read in full at our website.